We now have data further illustrating the degrees obtained and major areas for members of the high school graduating classes of 2007 and 2008. Instead of just “first-time full-time” grads, these data are for all students in those classes who have obtained certificates, Associate degrees, and Baccalaureate degrees.

Of the 83 Associate’s Degrees earned by the classes of 2007 and 2008, 24 came from Boise State University and the College of Western Idaho; the remainder were from colleges scattered around the region and the country. 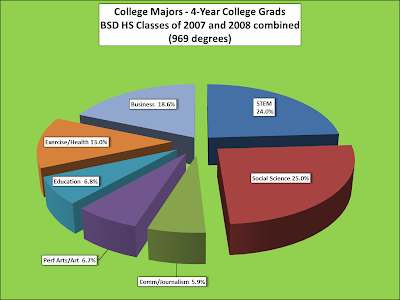 Of the BSD 4-year college grads, 284 (29%) graduated from Boise State University. Here is the distribution of majors among the BSU grads: 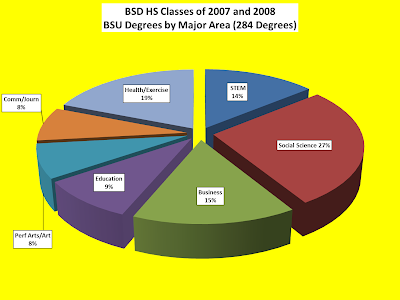 167 (17%) of the BSD grads matriculated from the University of Idaho. Here's a chart showing the major areas for those students: 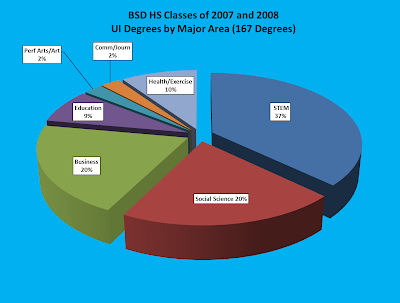 In November, we'll have 5 years of data from the high school class of 2009, and additional information about 2007 and 2008. We'll add those data into the mix, in order to continue tracking college destinations and majors.

Update
To date, 32.3% of the Class of 2007 have received a 2 or 4 year degree or a certificate from a college or university. For the class of 2008, the figure is 29%. College matriculation rates for every state are available at the National Council for Higher Education Management Systems site. These graduation rates are about three times those claimed in the Idaho Business for Education Field Guide to Education in Idaho on the Don't Fail Idaho website.
Posted by Unknown at 3:00:00 PM