First, the class of 2012. This chart depicts the percentages of high school grads in "large" districts (over 80 grads) who were enrolled in college at any time during the first 16 months after graduation. 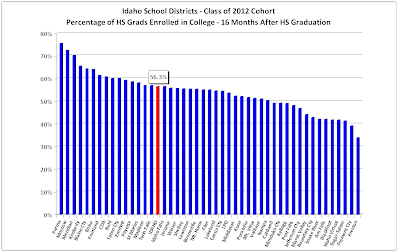 Eight Idaho districts have had more than 60% of their students attend college in the first 16 months after high school graduation. Parma, Moscow, and Meridian are above 70%. Kimberly, Boise, Blaine County, Fruitland, and Coeur D'Alene are between 60% and 70%. At the other end of the spectrum, Fremont County and Preston have had fewer than 40% of 2012 graduates enroll in college thus far. The average statewide is just above 56%.

For the class of 2013, here are the data, displayed in the same fashion. These data are the "direct to college" information for the districts; in other words, these percentages are for students who graduated and then attended 2 or 4 year colleges the next fall semester. 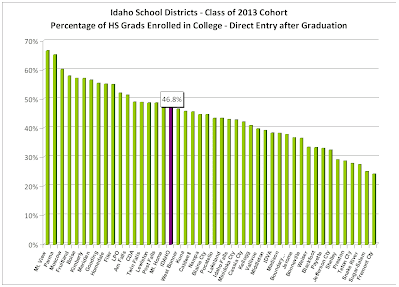 Though the state average is 47%, nine districts have rates of over 55%. Mt. View (Grangeville) and Parma are over 60%, and Moscow, Fruitland, Boise, Kimberly, Meridian, Gooding, and Homedale are above 55%. In Shelley, Preston, Teton County, Snake River, Sugar-Salem, and Fremont County districts, fewer than 30% of graduates entered college the semester after graduation.

It's interesting that Parma, Fruitland, and Kimberly appear near the top of class of 2012 and 2013 charts. What are they doing in these communities that causes such a high percentage of students to attend college?

"The Bruce Mitchell scholarships play a large role in why Parma grads go on. There is a Foundation Board that manages and oversees the program. Nothing is managed by the District other than coordinating meetings and interviews."

Bruce Mitchell was a Parma grad who worked for Idaho Power as an Electrical Engineer. He initiated the scholarship in 1991, when one award was given (the only one Mitchell saw awarded). As of 2013, 465 Parma students have received scholarships (about 70 students graduate from PHS each year), and over $3 million has been awarded in total. 100 Parma grads are currently being supported by scholarships, which begin in freshman year with $2000, and grow by $500 a year.

"The entire student body and the community takes part in an assembly to honor the Bruce Mitchell Scholarship winners. It is a big deal to students to be recognized at this assembly. A Community Award winner is also recognized."

As Districts work to improve "Go On" rates in pursuit of the State Board's goal of 60% of 25-34 year olds having a certificate or 2 or 4 year degree by 2020, it will be important to analyze what's happening across the state, and to look for examples of what's working. In Boise, a new scholarship sponsored by Bev and George Harad may be just the beginning of support efforts for or students.

There is more information available about college-going patterns across the state. In the next post, we'll examine 2 and 4 year college-going percentages, along with in-state/out-of-state and private/public percentages.
Posted by Unknown at 3:12:00 PM