In Part 1 of this post, we discussed statewide college-going rates for the classes of 2012 and 2013. The State Board of Education also provided some information about destination patterns among students in districts across the state.

It's interesting to look at trends across the state in terms of Two Year College attendance. The opening of the College of Western Idaho dramatically changed college-going patterns in the Boise District, especially at Borah and Capital High Schools, where many more students are now choosing the Two Year option.

Here's how the patterns look across the state of Idaho. The stacked chart below shows the percentage of class of 2013 students attending Four Year (dark blue bar) and Two Year (light blue bar) colleges. The state of Idaho is highlighted in red and yellow. 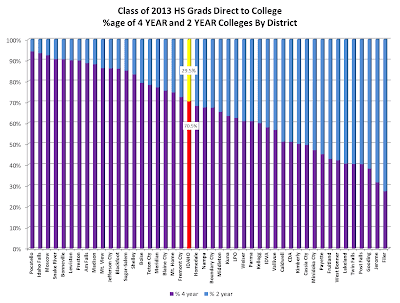 Note that Idaho Falls, Pocatello, Moscow, Lewiston, Snake River, Bonneville, and Madison are among those districts with the highest percentages of Four Year attendees.

Idaho Falls Superintendent George Boland noted that there isn't a viable two-year option for most students in his district, since Eastern Idaho Technical College in Idaho Falls fits a specific niche. Most IF students attend BYU-Idaho or Idaho State University.

This also the case in the Madison District down the road in Rexburg. Superintendent Geoffrey Thomas indicated that parents of many Madison students work at BYU-Idaho, and students receive reduced rate tuition there. BYU-Provo and Utah State University are also viable options for some of these students.

Of course, Moscow and Lewiston students have access to two four-year institutions in the neighborhood, the University of Idaho and Lewis-Clark State College.

At the other end of the spectrum, Post Falls and Lakeland have immediate access to North Idaho College, and students in Twin Falls, Gooding, Filer, and Jerome are close to the College of Southern Idaho.

Following is a chart showing in-state and out-of-state patterns in large Idaho school districts. Just over 3/4 of Idaho graduates who go on to college attend in-state institutions of higher learning. 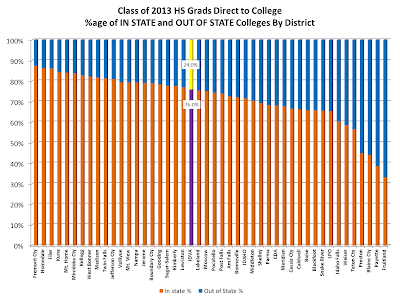 The highest percentages of in-state college attendance are in Fremont County (eastern Idaho), Homedale, and Filer. Fremont and Filer make sense (see above). Homedale Superintendent Rob Sauer indicated that there's a long-standing tradition among Homedale students of attending the University of Idaho.

Among the lowest percentages of in-state attendance are in Payette, Fruitland, and Weiser. Fruitland Superintendent Teresa Fabricius indicated that, for many Fruitland graduates, the proximity of Fruitland to the border makes Treasure Valley Community College a logical destination.
Posted by Unknown at 3:15:00 PM