Go On Patterns at Boise and Capital

At the senior high level, we find that free/reduced populations at Boise, Capital and the District as a whole stood at these levels in 2007 and 2013: 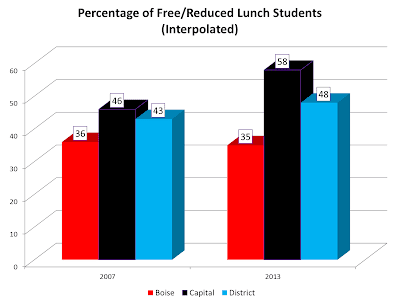 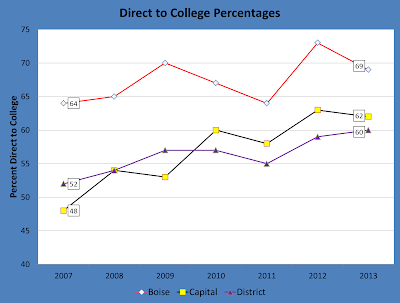 Note first that the percentages have increased at both high schools since 2007 (Boise from 64 to 69 and Capital from 48 to 62), and in the District. As demographics have dramatically changed at Capital, the percentage of students going on to college has increased substantially!

The same patterns emerge when we look at students who enter college in the first two years after high school. Here is that chart with Boise, Capital, and the District: 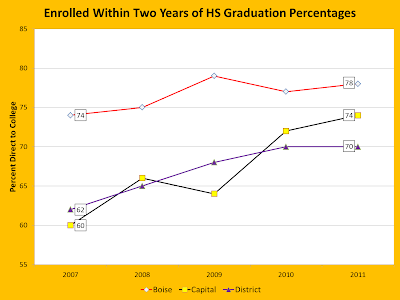 As you can see in this chart, the percentage of high school grads enrolling in college within 2 years of graduation for the class of 2011 is close to 80% at Boise High School, and is at 74% at Capital. Again, Capital’s percentages have increased dramatically even as the student population has continued to change.

What has caused such a dramatic positive change in Capital’s “Go on” rates? There appear to be several factors:
Boise High School graduates’ college going patterns differ markedly from those of Capital students. Here are the most popular choices for 2013 Boise High grads: 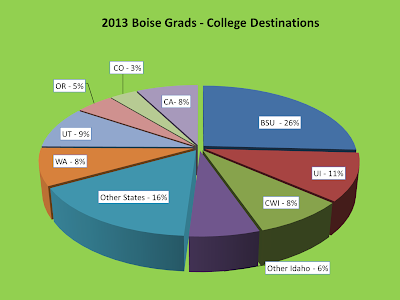 45% of Boise grads enrolled at Boise State, the University of Idaho, and CWI, with only 8% at CWI. Outside of these three schools, the most popular choices for Boise students were the University of Utah (17 students), the College of Idaho (8), Whitman College (6), and BYU, Western Washington, Cal Poly, and Idaho State (5 each). Forty-nine percent (49%) of Boise grads went to out of state colleges.

Here are the patterns for 2013 Capital graduates: 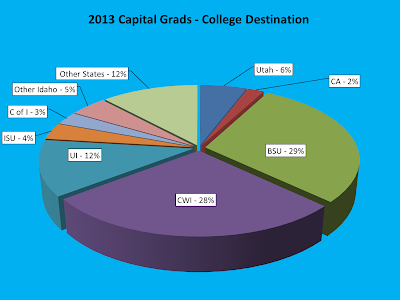