In February, Valerie Strauss, an education columnist at the Washington Post, wrote in her Answer Sheet blog about a new review of the research on class size by Northwestern University professor Diane Schanzenbach. Among the conclusions she drew from her analysis:

“The mechanisms at work linking small classes to higher achievement include a mixture of higher levels of student engagement, increased time on task, and the opportunity small classes provide for high-quality teachers to better tailor their instruction to the students in the class.”

In 2012, during the downturn in the state’s economy, the Boise District proposed a levy to maintain or reduce District class sizes. The levy passed with a 71% “yes vote”. Here is a presentation showing that district class size has remained stable in grades k-6 and declined slightly at grades 7-12.

During the recession, districts received relief from the “use it or lose it” provision that required districts to use dollars that funded instructional staff for that purpose, or lose those dollars. The result was that districts could hire up to 7% fewer staff than allocated by the state in 2011-12, and 9.5% fewer in 2012-13 and 2013-14. The 2012-13 staffing data for districts statewide is here (the chart heading erroneously says FY 2009). Boise was 222 (FTE) (full-time equivalent positions) (16%) over the state allocation.

During the 2014 Idaho legislative session, Representative Reed DeMourdant, chair of the House Education Committee, introduced legislation (HB557) that would phase in restoration of the "use it or lose it" provision, depending on where districts stand in a statewide comparison of average class size.His bill, which passed both chambers and was signed by Governor Otter, contained the following new language (underlined):

“A district may employ nine and one-half percent (9.5%) fewer positions than funded pursuant to subsection (2) of this section, without a reduction in the number of funded positions being imposed. Beginning in fiscal year 2016, this figure shall be reduced by one percent (1%) each year for each school district in which the average class size, as determined from prior fiscal year data reported to the state department of education, was at least one (1) student greater than the statewide average class size. The state department of education shall report to the legislature every February, beginning in 2015, on the reductions scheduled to take place in this figure, by school district, in the ensuing fiscal year.”

The State Department of Education will begin this year to determine average class sizes for districts across the state, and will report to the legislature their findings. We’ve never had a comparative index for class size in Idaho. This will provide excellent information for parents and stakeholders.

Of districts with over 30 instructional FTE, eight (8) were 9.5% or more under the state allowance in 2012-13: West Side, Melba, Oneida County, West Jefferson, New Plymouth, Sugar-Salem, Jefferson County, and Kamiah.

It’s important to understand the difference between average class size and student-teacher ratio. Average class size is found by determining the average number of students assigned to classroom teachers across the district. In grades k-6, this is relatively easy to determine; however, reading, p.e., and music specialists, along with most special education teachers, generally offer pull-out services in each building.

In grades 7-12, where students travel to different teachers during the day, it is a little more complex. Some classes (Special Ed, English Language Learner) are much smaller than the average, electives may be larger (Choir, Orchestra, P.E.) or smaller (some AP, Art, other classes), and “core classes” (Math, English, etc.) are usually larger than the average. 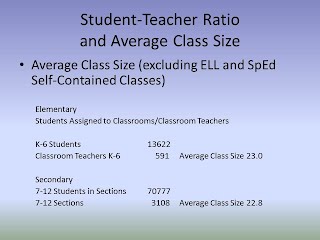 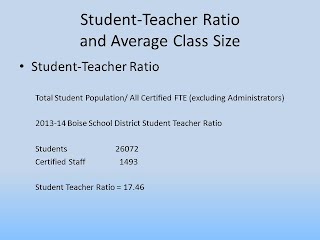 On the other hand, student-teacher ratio is simply the number of students district-wide divided by the number of teaching staff in the district (including reading specialists, physical education instructors, music teachers, special education teachers etc.). The student-teacher ratio will always be lower than the average class size, but average class size paints a more accurate picture of classroom conditions.
Posted by Unknown at 1:19:00 PM