Century Scholars - From Here They Can (and DO) Go Everywhere

For the past nine years, the Boise District has honored top students at Boise high schools with the Century Scholars award. These students, who have the highest weighted grade point averages (gpa) at their respective high schools, receive a medal and a certificate and are asked to choose teachers who have had a significant impact on their lives. These “distinguished educators” are honored along with the students. The ceremony typically takes place in April of each year and is sponsored by the Rotary Clubs of Boise.

It’s interesting to look at the characteristics of these top students in the Boise District. What follows is an analysis of the 2012-13 class of Century Scholars. This post focuses on the students from the four traditional Boise high schools.

The eighty-four (84) students (representing the top 5% of the class of 2013) sported an average weighted gpa of 4.27. The Boise District gives credit for Advanced Placement coursework on a 5-point scale, while credit for all other classes is on a 4-point scale. The Scholars took an average of 10 Advanced Placement courses. Two students took 18 AP classes, 1 took 17, and 3 took 16. 40 of the students took Calculus AB and BC, and another 32 took Calculus AB as their capstone math course.

The average ACT composite score from this group was 31 (the ACT is scored on a 36 point scale) which was at the 97th percentile on the ACT scoring scale. There were three perfect ACT scores from this group, and 22 Scholars scored 33 or higher, at the 99th percentile nationwide.

Century Scholars participated in all sorts of school activities and classes outside of Advanced Placement – from leadership to varsity athletics, chamber and jazz orchestra to ceramics, from debate to journalism, taking full advantage of the offerings of an elite public school system. 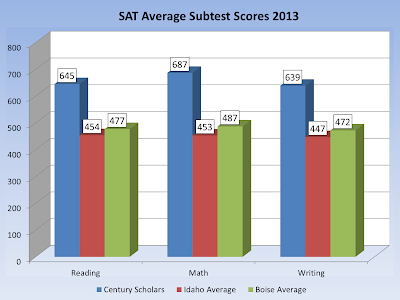 In terms of post-secondary choices, Class of 2013 Century Scholars enrolled in college in 21 states and the District of Columbia. Some stayed close to home – 17 (20%) stayed in Idaho; 7 at BSU, 3 each at the University of Idaho, the College of Idaho, and Idaho State University, and one at BYU-Idaho .

The majority of Scholars chose the northwest and the western United States for their pursuits – 5 attended in Oregon, 5 in Washington, 5 in Montana, 2 in Colorado, 11 in California, 6 in Utah, and 4 in Arizona. Others traveled across the country – 2 to the District of Columbia, 4 to Massachusetts, 2 to Maine, 4 to New York, and 2 to Pennsylvania, while two left the mainland for Hawaii.

A number of students are attending the most elite schools in the country. Georgetown, the University of Chicago, Brown, Harvard, MIT, Tufts, Duke, Columbia, Penn, Cornell, Carnegie Mellon, Santa Clara, and Stanford are among the destinations of 2013 Century Scholars.

Other Scholars are enrolled at some of the most prestigious liberal arts colleges in the U.S. – Grinnell (IA), Bowdoin and Colby (ME), Carleton (MN), Oberlin (OH), Lewis and Clark, Reed and Pacific (OR), and Whitman (WA) are included.

In 2013, two Scholars received appointments at military academies, one to The United States Military Academy at West Point, and the other at the United States Air Force Academy in Colorado Springs.

Wherever our Century Scholars choose to enroll, they bring an excellent academic record and a well-rounded background to their college and university experiences. They are truly an impressive group.
Posted by Unknown at 2:57:00 PM