Goodbye, Old ISAT... what were the results?

In spring 2014-15, the state of Idaho will officially move from the NCLB-era Idaho Standards Achievement Tests (called herein the “old ISAT”), to the Smarter Balanced Assessments (also to be dubbed the “ISAT”).

Beginning in spring 2007, a new vendor, Data Recognition Corporation, was selected to administer the old ISAT, and a new test was delivered to Idaho students. That first year, 79.9% of Idaho students in grades 3-8 and 10 received a mark of “proficient” or “advanced” on the test. In math, the percentage was 75.8%. In 2012-13, in the final statewide administration of the old ISAT, the percentages were 89.1% in Reading and 80.9% in Math. So, then, the improvement in proficient/advanced percentages over the six years of old ISAT administration was 9.2% in Reading and 5.1% Math.

However, this comparison of proficiency rates conceals something much more important that was happening in Idaho’s public schools. If we examine just the percentages of advanced students in each year, we can see that important shift. 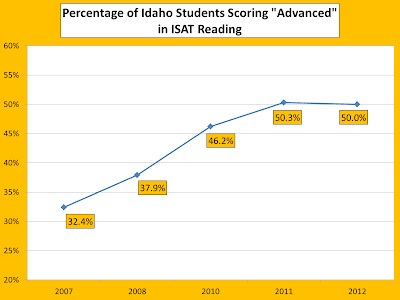 In old ISAT Reading, only a third of Idaho's 3-8 and 10 students scored in the “Advanced” category in 2007. By 2012, half of Idaho’s kids had reached that performance level. And, though the ISAT “advanced” level is not quite so high as that of the SAT, it’s clear that many more Idaho students reached a higher level of rigor in the time of the ISAT. In fact, almost 30,000 more Idaho students were “advanced” in 2012 than were in 2007. 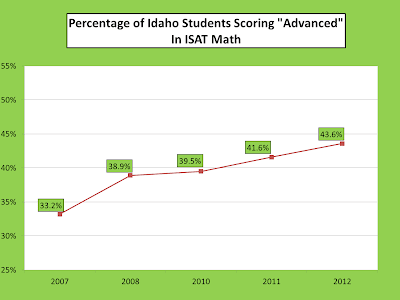 In Math, though the growth was somewhat less than that made in Reading, it was still impressive. Again, only a third of Idaho students were advanced in 2007. By 2012, 45% were in that category. That’s an improvement of more than 17,000advanced students from 2007 to 2012.

The measurement criteria used under the NCLB law, which labeled schools “failing” if they did not meet “Adequate Yearly Progress” with as few as 34 students among their total populations, obscured the tremendous gains made by Idaho schools and districts during the administration of the old ISAT. Those gains were truly impressive.
Posted by Unknown at 3:09:00 PM