SAT Math - Rigor and Scores of 700 and Above

In the 2013 administration of the SAT, a score of 700 or above in math ranked in the 93rd percentile nationwide. In Idaho, 247 students, or about 1.5% of the 16921 juniors who took the math subtest, scored a 700 or better on the School Day administration of the SAT. Scoring a 700 is rare, to say the least – most students scoring at this level have their choice of elite schools (of course, they also have high gpa’s, are involved in campus leadership activities, etc). 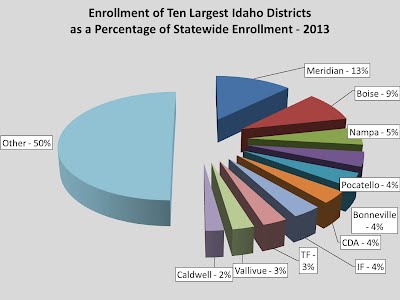 The vast majority of SAT math scores of 700 and above were also in large districts, but the distribution pattern was very different. 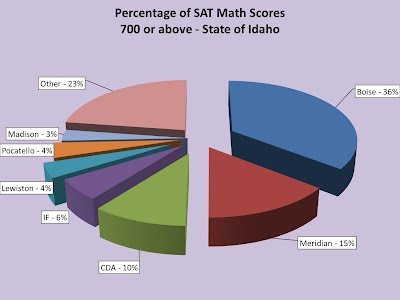 In Coeur d’Alene, the two comprehensive high schools (Lake City and Coeur d’Alene) had 9 of the 25 students who scored 700 or better. Sixteen (16) of the students were from Coeur d’Alene Charter Academy. Interestingly, the class of 2014 at CDA Charter had 105 students in the 7th grade, but when the class took the SAT in 11th grade, only 76 remained, a 30% loss among the student population. CDA Charter students are clearly a special group which achieves at a high level.

However, since CDA Charter has a select population, and Timberline High is a comprehensive high school, a better comparison would be a specialized group in the Boise District. For example, the Treasure Valley Math and Science Center uses teacher recommendations, test scores, and an application process to select students who want an accelerated math and science program, and provides a rigorous curriculum, as does CDA Charter. TVMSC is a half-day program offered at a center on the campus of Riverglen Junior High in Boise.

Students who scored 700 or better were obviously very skilled in math and in problem-solving. However, this level of performance also requires a certain level of content knowledge in mathematics. Of the 88 Boise District students who scored 700 or above in 2013, 87 took Advanced Placement Calculus AB and/or BC as part of their high school math programs. This means that these students were enrolled in AP Calculus AB or Accelerated Math Analysis (or in a few cases AP Calculus BC) as juniors. The lone student who did not take Calculus took AP Statistics as a senior, and was enrolled in Accelerated Math Analysis as a junior.

Of course, a number of students who took Calculus did not score 700 or above in math on the SAT. So enrollment in these courses does not guarantee the highest scores. However, taking advanced math does appear to be a prerequisite for scoring at the highest levels in SAT math.
Posted by Unknown at 3:30:00 PM