The results of the 2014 SAT Schoolday administration were released last week. This was the third annual administration of the SAT to juniors statewide. The State Department of Education coordinates the administration, and juniors are offered the opportunity to take the exam at no cost.

For the purposes of this post, we considered only high school where 75 or more juniors sat for the SAT Schoolday exam, and only those schools in which 80% of juniors took the Schoolday exam. For the purpose of evaluating growth from the 2013 exam, we used only schools that tested 80% of juniors in both years. High schools in which less than 80% of students took the 2014 SAT were Blackfoot, Bonners Ferry, Burley, Canyon Ridge (Twin Falls), Jerome, Post Falls, South Fremont, and Wood River (Blaine County). 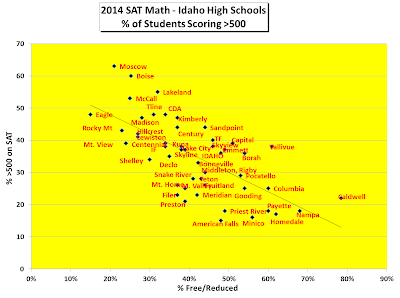 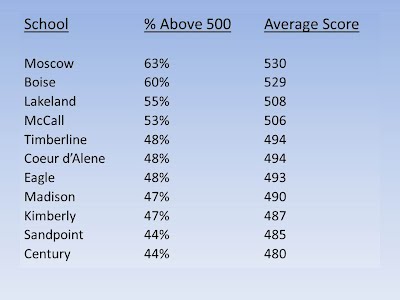 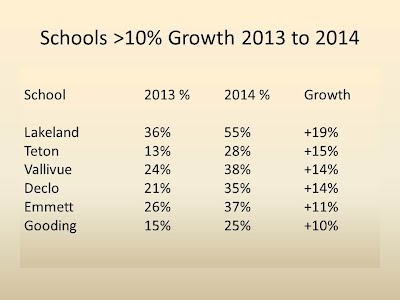 Limited English students, especially refugee/immigrant students who had been in the United States for a relatively short time, struggled with the ISAT, a multiple choice test that assessed relatively low level skills in a multiple choice format. As you can imagine, these students have an even more difficult time on the SAT, and will have similar issues with the Smarter Balanced Assessment next spring.

For example, here are the scoring patterns for a native – speaking student scoring 660 on the SAT math test, and a Limited English student.

Research on language learning among LEP students shows that “a period of 5-7 years was required, on average, for immigrant students to approach grade norms in academic aspects of English.” (Cummins). Further, a 1995 article by Virginia Collier indicates that “In our studies we have found that in U.S. schools where all instruction is given through the second language(English) nonnative speakers of English withno schooling in their first language takes seven to ten years or more to reach age and grade-level norms of their native-speaking peers.”

On the old ISAT, LEP students were exempted from the language and reading subtests for one year. For the SAT, students can take another exam (ACT or Compass), or have their scores exempted from a school’s totals during their first three years in a United States school.

As noted in a previous post, Borah High School has the largest number of LEP students in the state, primarily because the district’s Bridge program for immigrant newcomers is housed at Borah. Fifty-four (54) LEP students took the SAT at Borah. Those students’ average math score was 338. Five (5) (9%) scored above 500 in math, 0 in reading, 0 in writing.

So, what happens when the LEP student scores are taken out of Borah’s percentage of students scoring 500 or above?

Borah High School – Percent 500 or above

Other districts have high percentages of Limited English Proficient students, though probably not to the level of Borah with its Bridge program. We don’t know the extent of the effect on SAT performance, since the number of LEP tested students is not released by the state.
Posted by Unknown at 3:23:00 PM