In the 2014 legislative session, Representatives Hy Kloc (D-Boise) and Doug Hancey (R-Rexburg) brought a bill that would have initiated a pilot of pre-kindergarten in the state of Idaho. Though the bill did not pass, it has stimulated much conversation about the benefits of Pre-k.

Several years ago, the Treasure Valley Educational Partnership set goals in five areas and identified baseline metrics for those goals. Goal 1 is “Prepared for School”, and the baseline measure is student performance on the Fall Kindergarten measure of the Idaho Reading Indicator, a reading screener used with K-3 students in Idaho. The data used herein come from the Fall, 2013 Kindergarten IRI. Thanks to TVEP Data Director Sarah Weppner for the idea for this post.

The Fall Kindergarten measure for 2013 contains the most recent Idaho data on reading preparedness. Here’s how the statewide data looked for Idaho in 2013: 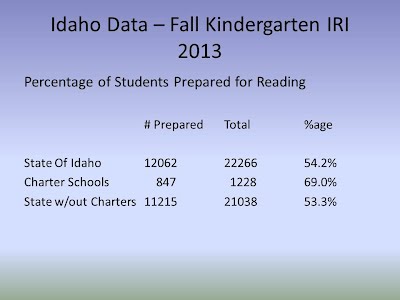 A substantially higher percentage of Kindergartners entering charters around the state were prepared for reading than were in elementary schools around the state. Of the 33 charters in which students took the Fall K IRI, only five had percentages below the state average: Taylor’s Crossing (Idaho Falls), Heritage Academy (Jerome), Chief Tahgee (Fort Hall), American Heritage (Cottonwood), and Another Choice(virtual).

The five charters which had the highest percentage of entering students prepared for reading were: 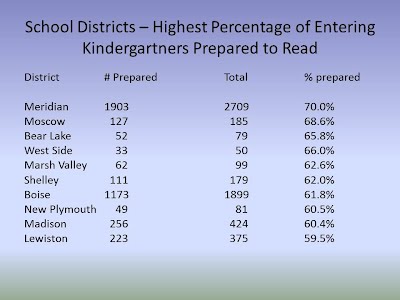 What’s interesting is the gap between the districts with the highest percentages of students prepared for reading and those with the lowest. While Meridian’s percent prepared is at 70%, five districts had 30% or fewer of their entering kindergartners prepared to read: 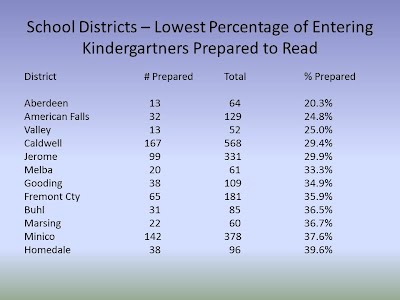 Fifty-three percent of statewide elementary schools were above the state average in terms of readiness for reading on the Fall K IRI. Among schools with over 20 kindergartners, the highest percentages were:

Of interest is the elementary school in the Basin School District (Idaho City), which has run a preschool for a number of years. Though Idaho City Elementary had only 14 kindergartners in 2013, 11 of those students (79%) were ready for reading according to the Fall IRI results.

According to Basin Superintendent John MacFarlane, the percentage of prepared kindergartners in Idaho City jumped from the 30% range to its current status with the introduction of the pre-K program, and has remained high since.

Using the same metric (more than 20 kindergartners), the schools with the lowest percentages of “ready to read” kindergartners were:

You may find a pdf copy of the data used for this post here. The spreadsheet is available upon request or can be downloaded from the ISDE website.
Posted by Unknown at 3:17:00 PM